The parents and community members that make up the P&C at Haberfield Public School object to the WestConnex development. We do not believe this is an efficient use of $15.4 billion of taxpayers’ funds, because we do not believe it will lead to the congestion improvements promoted by the State Government and the WestConnex Delivery Authority (now Sydney Motorway Corporation). We are deeply troubled that the State Government has ignored the community by signing contracts to build this road before releasing this EIS, thefull business case, or obtaining planning approval – this is a reprehensible lack of transparency and proper procedure. Without seeing the business case the community has no way of knowing what other alternatives were considered and what their associated costs were. We are also troubled that the ‘consultation’ with the community has primarily been done in a way that disempowers the community from feeling like they can influence the outcome.

The Project will have a devastating impact on the Inner West and particularly on our communities of Ashfield and Haberfield. Ashfield is one of the most densely populated communities in Sydney and Haberfield has great historical significance, therefore the decision to proceed is all the more bewildering. As one parent said at a recent WestConnex information night held at our school, we feel Haberfield Public School is at the centre of a “toxic triangle” of pollution stack and portals under the current WestConnex plans. On top of that, we will have four construction zones within several hundred metres of the school operating for at least three years. Our school draws more than 60 per cent of its students from the Ashfield side of Parramatta Road and the Five Dock side of Wattle St – turning both roads into 10-lane motorways will literally carve two giant holes through the middle of our community.

We also do not believe that our concerns about WestConnex have been adequately conveyed in the EIS. While it acknowledges that we have concerns about the Project and have requested mitigation measures, it does not convey the breadth of the issues we have raised in meetings with WestConnex representatives at all satisfactorily. Below we have outlined our concerns for our children’s health and safety and the impact on our community, plus made suggestions to address them. 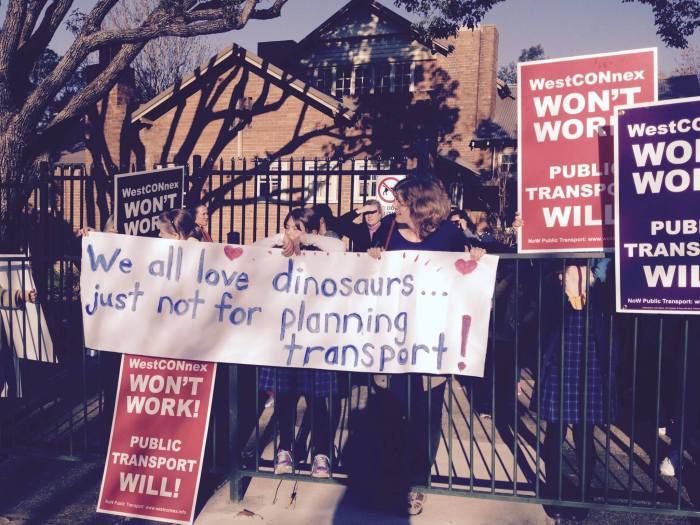 At the information night at our school attended by WestConnex representatives, we were told the proposed location for the eastern ventilation stack is “optimum”. It feels far from optimum to our community. The Haberfield P&C is not satisfied by the EIS’s suggestion that the increase in emissions will be negligible, and we are concerned that our children’s health will suffer from vehicle emissions from tens of thousands of cars being dispersed near our school from the pollution stack opposite the Bunnings site. We request the following action:

The Haberfield P&C is concerned that our children’s learning and play at school will be disrupted by noise generated during construction by heavy machinery and vehicles operating close to the school. We note that the school site (NCA19 in the Noise and Vibration report) is expected to have “high worst-case NML exceedances during the daytime” from construction and demolition work. We request the following action:

Traffic during construction and when tunnels are operating

The Haberfield P&C is greatly concerned that our children’s safety will be put at risk by changed traffic behaviours as a result of WestConnex during construction and when the tunnels open. For instance, we understand the pedestrian overpass at the corner of Bland St and Parramatta Rd will close for a period during construction – this is used by many students and parents to get safely to and from our school. We note also that the Brescia property at that intersection will be a major construction site, with heavy vehicles departing the site on to Bland St – a narrow and congested road at the best of times. Hundreds of heavy vehicles will use this and other intersections used by our students: for instance, the EIS reports that 80 trucks will use the Wattle St/Parramatta Rd intersection between 7.30am and 8.30am alone. Rat-running in local streets is likely to increase as drivers avoid using the tollways – motorists already use the streets of Haberfield and Leichhardt to avoid using the City West Link. On top of all this, many of the local intersections are expected to remain at Level F following construction, which is another outcome that leads us to question the efficiency of the whole WestConnex project.

Dalhousie (between Parramatta Rd and Ramsay St), Rogers, Chandos,Bland, Alt, Walker, and Ramsay (before and after the Haberfield shopping area, and also between Marion and Sloane Streets).
On Denman Ave outside Haberfield Public School.

One of the stated priorities of this project is to “Create opportunities for urban revitalisation, improved liveability, and public and active transport (walking and cycling) improvements along and around Parramatta Road”. After reading the EIS and hearing the WestConnex representatives at our school’s information night, we see no evidence of such improvements in our community. Indeed, when raised at our meeting, your representatives seemed surprised that we would request such improvements! It is a massive missed opportunity not to leave us with better connections for active transport between Haberfield, Ashfield and Five Dock after dividing us even further with massive roads and tunnels.

This Project is already having a significant and direct social impact on our school community. Many families have been forced to leave their homes, and some of them will be unable to remain at the school because the compensation they receive does not allow them to rent or buy in the neighbourhood in future. This is devastating for them, and the children and adults who have become their friends through school. Many heritage homes and buildings will be demolished, to be replaced by an ugly and enormous ventilation stack and widened roads. These will be a constant reminder of the loss of community wrought by this Project. We do not feel the EIS adequately acknowledges or compensates us for this impact.