(Ed: This is Part 2 of Transport Economist Lyall Kennedy’s submission to the EIS. Kennedy is a transport economist and ex Mayor of Ashfield Council. Part One is here)

What came first – WestConnex or the Strategic Plans

There is a requirement for the EIS that the proponent’s proposal is consistent with all Sydney’s strategic planning instruments. Requiring this project to be consistent with all strategic planning instruments sounds reasonable until you realise that all the plans were rewritten in 2012/2013 to place WestConnex at the centre of their transport strategies.

Up until 2012, metro strategy development in NSW was based on developing the broad strategy planning objectives and then discussing options to meet these strategic objectives before proposing individual projects/actions. Linking the M4 with the M5, as proposed by WestConnex, was never included as a project to realise previous Metropolitan Strategies.

Once WestConnex became the number one infrastructure project proposed by Infrastructure NSW, all strategic planning documents were rewritten to include WestConnex. In fact, it became the centrepiece of the transport strategy. This was after extensive community consultation was undertaken in February 2012 for the Long Term Transport Master Plan which did not include Westconnex.

Even allowing for the bastardisation of the planning process, this submission identifies areas where the M4 East extension is inconsistent with the Metro Strategy. These include:

Who Benefits from the WestConnex Motorway?

Given that WestConnex provides a direct link to Sydney Airport but not to the city or Port Botany (which is eight kilometres from WestConnex) who is the big winner out of this project?

I would suggest that MAp Airports Limited the then owner of Sydney Airport appears to be a major beneficiary. Since at least 2004, Sydney Airports has pushed in each of its Master Plans for improved links to the M4.

In 2011 the debate on a second Sydney airport was well advanced with the Federal Government considering a further proposal. If billions of taxpayers’ money could be spent on improving road connections to the airport, this would cement Sydney Airport as the primary airport for Sydney for decades to come.

But how could an individual company influence the deliberations of Infrastructure NSW? One way may be to have the Chairman of Sydney Airport Holdings Max Moore-Wilton as a Board member.

The only major attractor that is served by WestConnex is Sydney Airport. According to the WDA spin, among the benefits that WestConnex delivered included reducing the travel time from Parramatta to the airport by 40 minutes and bypassing up to 52 sets of traffic lights. They failed to say that you can now avoid the 52 traffic lights now in 2015 by catching the train which takes 45 minutes from Parramatta to the airport. According to google maps it takes between 39 and 54 minutes to drive between Parramatta and the airport. The claim of a 40 minute saving seems heroic.

The cover of the Strategic Environmental Review released by WDA in 2013 was a picture of the airport.

Sydney has underinvested in public transport over the past 30 years

In 1998 the NSW government released Action for Transport 2010 an integrated transport plan for Sydney. The plan proposed to:

“redress the [then] current imbalance in the road and public transport system.”

The plan included a 10 Point Action Plan for Sydney:

All the projects in bold were built. It can be seen from the list that every road project was delivered. Of the 16 public transport projects only four were completed.

The inability for successive governments to deliver public transport projects has made Sydney (particularly western Sydney) more car dependent. Building more roads has not had any lasting impact on road congestion. The traffic projections in the current M4 East EIS show the tunnel at capacity by 2031.

“2031 AM peak and PM peak operational performances (in comparison to the ‘do minimum’ results) are detailed in Table 10.7 and Table 10.8 respectively.
High traffic densities are now recorded in the project’s mainline tunnel east of Concord Road, particularly westbound during the AM peak and eastbound in the PM peak where capacity is reached.”

What is the plan post 2031? Building more roads will not solve traffic congestion in Sydney.

The Benefit-Cost analysis of WestConnex is evaluated over a 40 year period. Relieving traffic congestion on the corridor appears to be a major objective of the project. The project reaches capacity in the M4 East tunnel within eight years after project completion. This does not seem to be an effective means of relieving congestion. The Cost-Benefit analysis should include costs of additional measures required over the remaining 32 years of the project life to maintain the claimed congestion and travel time savings. If included, it is likely that the project costs will significantly outweigh any benefits. 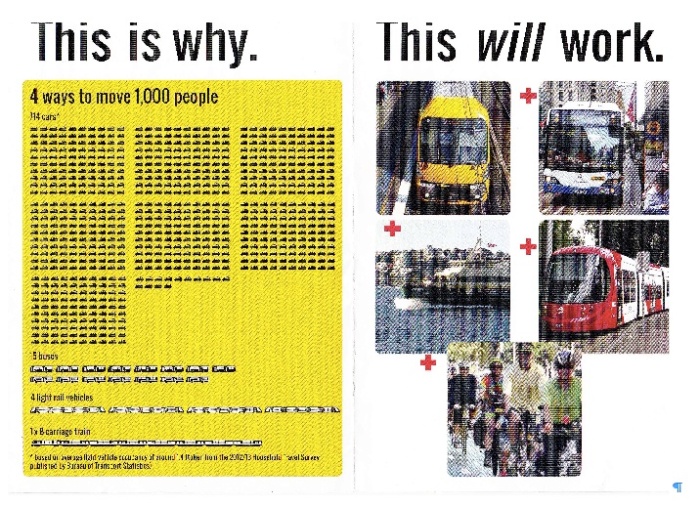 M4 East Past and Present

The M4 East was previously proposed in 2003/2004. The Sydney Motorways Project Office prepared a strategic environmental review of the WestConnex project in 2013. Chapter 4 of the review outlined the WestConnex scheme development and alternatives.

It is worth noting that this section covering alternatives to the then $10.5 billion project was only four pages long out of a 127page document. The review gave a brief history of the M4 East proposal.

“The M4 Motorway between Emu Plains and Concord has been progressively developed over a 40 year period. The section between Parramatta and Concord was opened in 1992. An eastern extension of the M4 Motorway to the Sydney CBD was subsequently planned and a scheme was publicly exhibited in 2003 to 2004 which proposed extending the motorway to the City West Link and widening the existing motorway. This scheme did not proceed due to concerns over economic viability and environmental impacts.” (p.25)

In the current M4 East EIS the following explanation is given:

“Between 2003 and 2004 a preferred option for an eastern extension of the M4 to the Sydney central business district (CBD) was developed and publicly exhibited. This option, referred to as the M4 East, proposed extending the M4 to the City West Link and Parramatta Road at Ashfield as well as widening the existing motorway between Homebush Bay Drive and Concord Road. This scheme was put on hold indefinitely by the then NSW Government. The 2003 preferred option formed the basis of the concept design for the M4 East project, which forms part of WestConnex.”
WestConnex M4 East Environmental Impact Statement, Volume 1A, WestConnex Delivery Authority, September 2015, Page 4-1

The two reports appear to contradict each other. It is quite a different proposition to a project being abandoned “due to concerns over economic viability and environmental impacts” and simply putting the project “on hold”. There is no analysis in the current EIS as to the reasons why the original proposal did not proceed. The comments in the Strategic Environmental Review should have been addressed in the EIS. What has changed since 2004 that now makes the M4 East economically viable with positive environmental impacts? The failure to release the business case further exacerbates the situation.

The project should not be approved without a full appraisal of the economic and environmental impacts of the proposal with particular reference to how the current proposal overcomes the previous concerns raised in 2004 that led to its abandonment.

The two reports appear to contradict each other. It is quite a different proposition to a project being abandoned “due to concerns over economic viability and environmental impacts” and simply putting the project “on hold”. There is no analysis in the current EIS as to the reasons why the original proposal did not proceed. The comments in the Strategic Environmental Review should have been addressed in the EIS. What has changed since 2004 that now makes the M4 East economically viable with positive environmental impacts? The failure to release the business case further exacerbates the situation.
The project should not be approved without a full appraisal of the economic and environmental impacts of the proposal with particular reference to how the current proposal overcomes the previous concerns raised in 2004 that led to its abandonment.

Reasons given for Westconnex M4 East don’t stack up

“Parramatta Road is now one of the six most congested transport corridors in Sydney, with high travel demand and average travel speeds of private vehicles during the morning peak of about 30 kilometers an hour.”
WestConnex M4 East EIS, Vol 1A, Page ii

The EIS does not say where Parramatta Road sits in the top six most congested roads in Sydney. Is it the worst or is it the sixth worst? If it is the sixth worst why is $15.5 billion being spent on this corridor while the other five more congested corridors are not being given priority? There is no discussion in the EIS on the comparative advantages of spending the money on WestConnex as opposed to the other congested corridors.

“The Parramatta Road corridor is also one of Sydney’s busiest corridors for public transport. It has one of the highest number of bus passengers during the morning peak of any major bus route in Metropolitan Sydney.” M4 EIS vol 1A p.ii

Buses from the inner west carry around 10,000 passengers in the busiest hour into the city (as measured at Broadway). This includes the routes along Parramatta Road and King Street Newtown. However, in the study area, in particular Parramatta Road between Concord Road and Burwood Road there are no existing bus services. Between Burwood Road and Wattle Street, there is only one bus route the 461. This route has a peak frequency of 4 buses per hour. This gives a capacity of less than 250 passengers per hour. It is not a strong bus route due in part to its proximity to the main western rail line which accounts for most of the peak public transport demand on the corridor.

Part One of Kennedy Submission can be found here